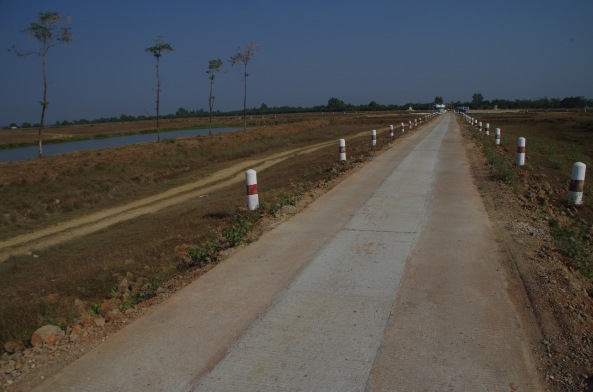 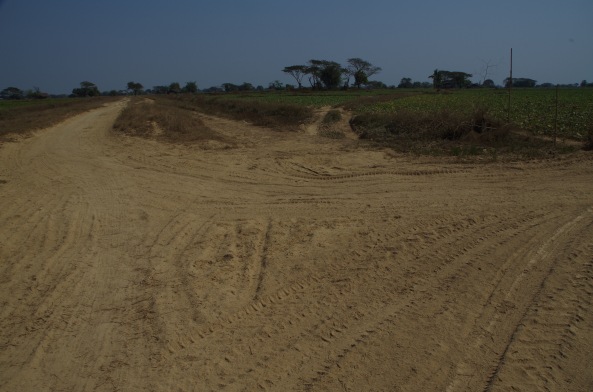 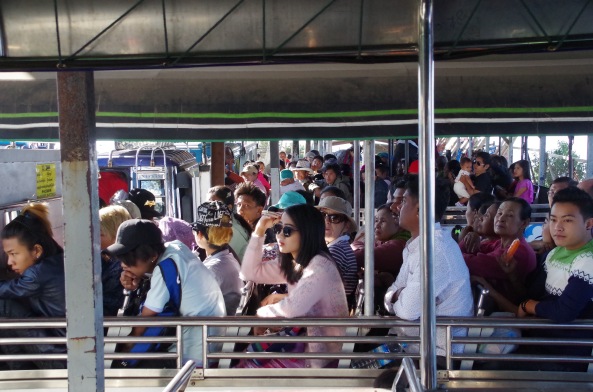 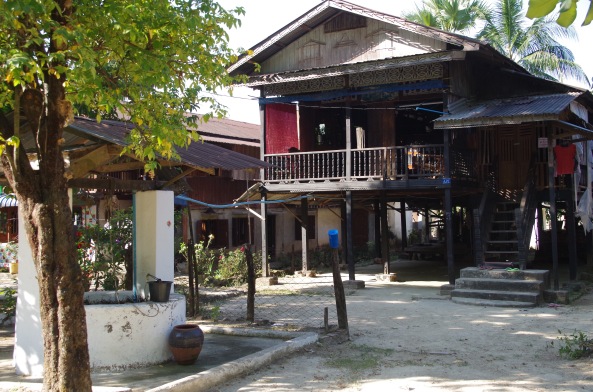 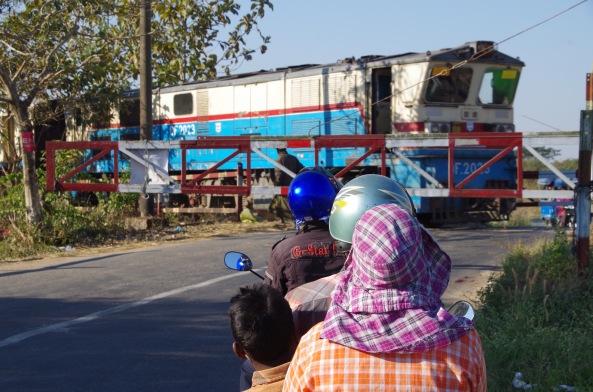 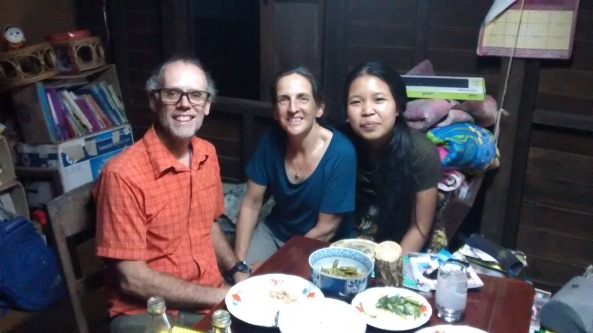 Some info about Myanmar as in February 2017.

Things are changing very slowly but rules may change at anytime.So please verify before. But here is what we lived and learned.

For visa concerns, if you’re country is on the list for a e-visa, it’s very simple, go to  e-visa  We got it by mail within 24 hours. It’s a letter that you print and show when entering at the border. You have to mentioned your point of entry but not the exit point. You may enter by plane or land and leave at another point. Always look at the open border, India border seems to be a problem as we where told. We came in by air to Mandalay and exit to Mae Sot in Thaïlande. The duration is 28 days, but yes you can overstay. 3 $us in US dollars per day per person and they don’t get mad as long as you pay they smiles. At this time Myanmar really look to have many tourists and green dollars. We overstayed one day as you can see in my passeport 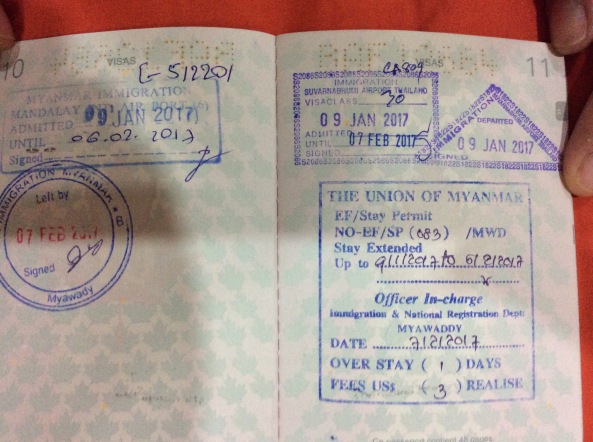 Some area are still closed to us, like Mogok when we were close to it. We where not allowed to cycle the area or even to stay at guesthouse. It was only possible to take a mini bus to visit during the day and back at night.

Camping. A simple no. Some did, but most were caught and lead to a hôtel brutally. The police really don’t like strangers in the wild. Go to guesthouse for foreigners even if sometimes they are far away. It’s a good idea to book with sites likes Agoda or booking.com but not a necessity. In small towns sometimes you have only one or two places. Only once we were told that the guesthouse was full and the other where not allowed to accept foreigners. We ad to do 60 more km!

Internet you will get in almost every guesthouse… but very slow.

We ad no Check points but many tolls. You don’t have to pay or to stop. Just follow the motorcycle path. Only bus and cars pay for the roads.

The use of a gps or cell phones with Maps Me is very useful as the indications are unreadable. And, if you want to go off the main road as we did sometimes it is fantastic. We used Maps Me and it was great. Sometimes you end up on sandy tracks but no trafic and close contact with the small community . Many roads are under construction or enlargement, it is slow, most is done by hands. 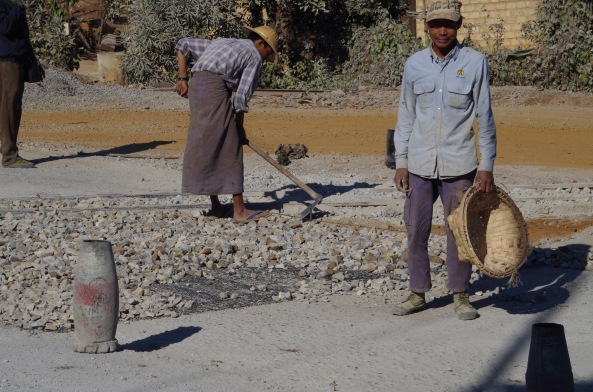 The weather in January and February was very hot for us. Close to 40′ after 11:00 am. No rain and all sun for a month . The afternoon is very hot. Apart of the mountains of course. In Pyin Oo Lwin at 1000m. It was cold at night, so it was in Kalaw. Talking about Kalaw, that day from Thazi is a 94 km ride with 1470m. of altitude gain. One of the most beautiful days on the road. The last 30 km is uphill.

Roads and cars and drivers. The most dangerous road we ad was the one from Hsipaw to Mandalay. So many trucks from and to China. The others where better and we also took some side roads. The main road from Bago to Mae Sot border is good and a large part of it if wider or on the way to be larger. They drive on the right side of the roads but the driver is also at the right side of the car! So. A lot of horn to say that they are passing. In general a lot of horn is going on. Don’t be surprised to see motorbikes on the wrong side of the road, be aware, and a bell can be useful .

Smoke and pollution. At this time of the year a lot of small fire is going on and a perpetual smoke is in the valley with the motorbike and diesel trucks helping. Plastic bags and water bottles are also a big problem.

If you pass by the town of Kawkareik you may contact Sue Sue (smile Angel on Facebook and on Warm Shower ) she can not host you but she is so interesting and she will show you many things. She will tell you also about her teaching plan about plastics.

Smiles and kindness you will find in this country. They are so happy to see us. They are so kink and helpful even if sometimes it is difficult to communicate. We felt absolutely no fear even walking after the sunset in town. No asking or begging, or so little. They will waved at you, help you with your luggage or guide you to the hotel without asking for a tip. At many gas stations they would give us cold water bottles and sometimes peoples would pay our tea at a rest stop. They surtainly don’t understand why we are cycling so long distances. It is out of there understanding, even 20 km to the next town! They all go to school by bike do. But as soon as they can afford a Chinese 500$ motorbike they are on it.

Buddhas and stupas. Many, too many? Up to you and your interest. Bagan is a must. One we didn’t expected but we liked was in Thaton at the round about and the one on top of 900 stairs! No tourist. The Golden Rock is worth the bus ride from Kinpun where you may sleep. That 11 km is so abrupt, I am not sure if a cyclist can do it. Not allowed any way.

You will also like Inle Lake and the fisherman. 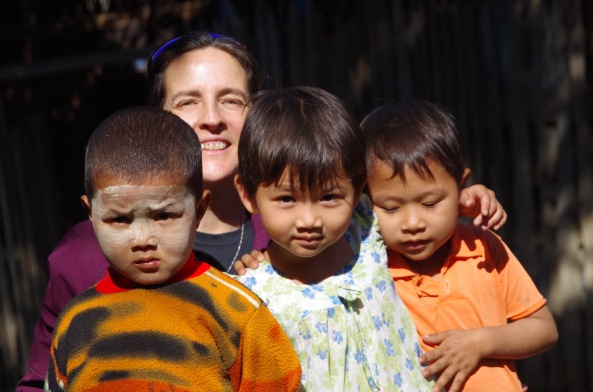 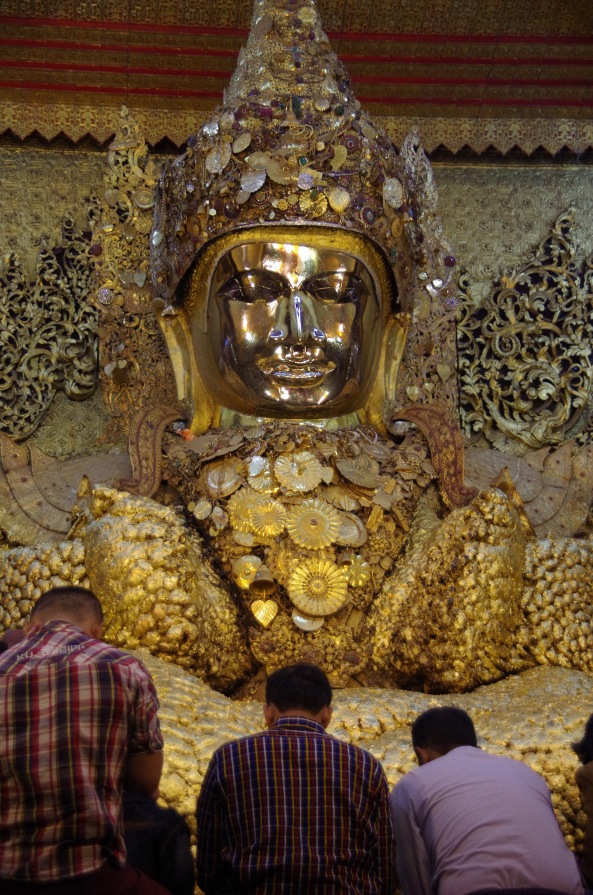